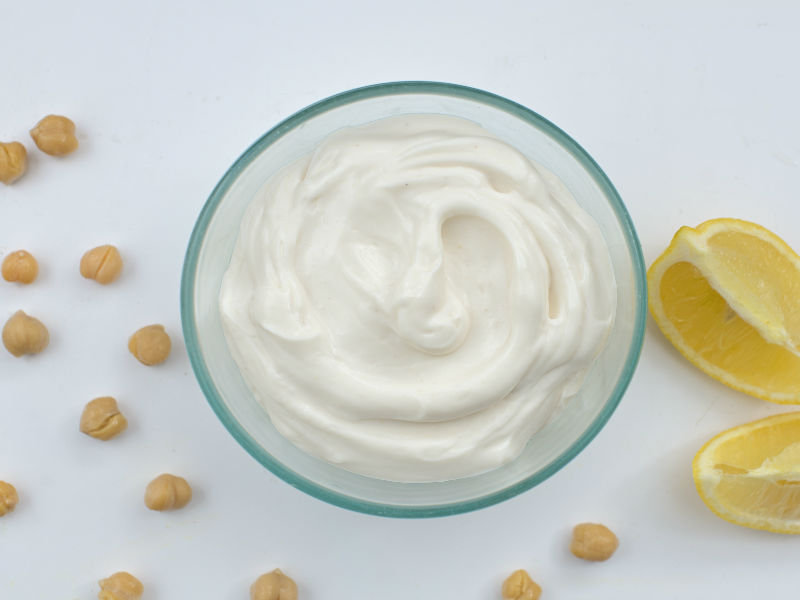 Don’t know what aquafaba is? Don’t worry. You’re not alone. Some people think it’s a brand name, others wonder if it’s a weird dessert. In reality, it’s the viscous liquidy goop in a chickpea can (or other legumes) that you probably rinse down the drain. Pro-tip: don’t throw it away!!

After some intense vegan egg substitute experimentation, it officially became a “thing” in 2015 (with Aquafaba.com) when a tech-savvy engineer and a 45,000 person vegan Facebook group settled on a name for this magical substance. They settled on a Latin word combo for “bean water”, and aquafaba was born.

Aquafaba is unlike other egg substitutes because it isn’t gummy or seedy (like flax or chia) and it’s got a mild flavour. This neutral taste and texture make it particularly ideal for delicate egg white recipes – like meringues or mayo. And after some trial and error, our chef Vlad came up with the perfect vegan mayo recipe: it’s creamy, a bit tangy, and legitimately tastes like the non-vegan mayo people know and love. We’ve got two flavours, classic and chipotle. Here at HQ we ate them both with crackers and they were a huge hit. (Mayo + crackers though? Not your typical combo.) Whether you’re vegan or not, this vegan mayo is something you won’t be able to get enough of. Try it on your next BLT or veggie burger for a creamy kick, or eat it solo with crackers like we did (*do).

Find our vegan mayo in-store or online at SPUD.ca! 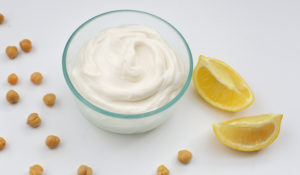 Luumi: The Future of Unplastic Packaging is Here

The future of food packaging has arrived, and we are proud to offer it both…

We’ve got mugs! These bad boys have been in the works for while now, so…

Seasonal Product: The Watermelon Is BACK!

One ingredient – watermelon. No need to add anything. After all, you can’t improve perfection.…