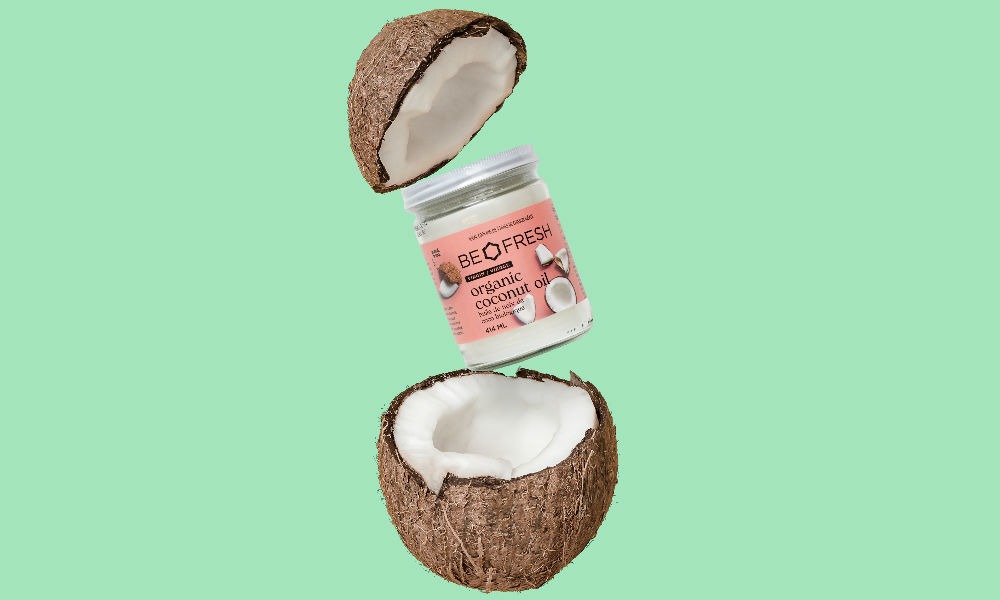 By now, coconut oil is a pantry staple. Or my case, both a pantry staple and a medicine cabinet staple (I use it for an eye makeup remover, a moisturizing hair mask, a bath oil, you name it). That’s why I’m especially excited for our new Be Fresh coconut oil!

What makes this oil so special (aside from its cute pink packaging)?

You’ve probably noticed the words “refined” or “unrefined” on you jar of coconut oil. The difference is in how it’s produced. Refined oil is extracted from dried coconut meat and then undergoes various types of processing (such as bleaching and deodorizing). It’s a mild tasting, clear oil. Unrefined oil, also referred to as ‘virgin’ or ‘pure’ is extracted from fresh coconut meat (ours is scooped out by hand!) spun in a centrifuge. It has a tropical coconut scent and flavour. Because it is less processed and therefore retains more of the nutritional benefits inherent in the coconut, many people prefer unrefined oil for both consumption and topical applications.

Although the pesticides and fertilizers used in the growth of conventional coconuts are not likely to impact you, they can have a big impact on the people who grow the coconuts and live in the surrounding area. They can also be very detrimental for the environment. By buying organic, you’re voting with your dollars for a farming system that is safer for both people and the planet.

Until recently, I never thought about where the actual coconuts for coconut oil came from, so I was surprised to learn that the majority of the coconut harvesting in Southeast Asia is done by captive monkeys. While that might sound cute, there are a lot of claims that the monkeys are mistreated or abused by their handlers. The coconuts for Be Fresh coconut oil are harvested by (willing) humans, not monkeys, making it suitable for those who choose to avoid animal products.

Get Be Fresh Coconut Oil at SPUD.ca
nutritional yeasttrendsvegan

Join Us For A Backyard BBQ + Night Market This Summer!
Nutritional Yeast: What The Heck Is It?